After the Oct fires I was unsure as to what I was going to do. After meeting with Mark and Kelli from LCC there was no question! Within 7 months of complete devastation I was back in a beautiful new home! Not only that but great friendships were born! An amazing company that works “Magic” on a House by house basis! Thank You so much LCC!!”

“From beginning to end Lake County Contractors made our building experience fun and easy. Mark Mitchell drafted our plans and walked us through our house-to-be on his computer. Aaron Wooden helped us find everything we wanted for our house. They both responded right away to any communication from us. The carpenters and subs were excellent and courteous. We could not be happier with our house! Thanks to Lake County Contractors for making our dream house turn out beyond our wildest dreams!”

“These Guys know what they are doing and always look out for our best interest. They have completed multiple commercial projects for us as well as remodels to our personal residence.”

Lake County Contractors designed and remodeled a former Church and school for the administrative and clinical offices of Hospice Services of Lake County.  Mark was an advocate for us in working with the City of Lakeport.  His knowledge of local, state and federal ordinances saved us time and money.  Lake County Contractors were timely and efficient throughout the entire project.  After the job was complete, Mr. Mitchell and his partner Mr. Wooden have helped us resolve all problems that have arisen with the remodel.  They inspired trust and confidence, especially helpful, when I, as a novice to such a large project, needed to depend on their expertise and honesty.

“We have a home again, our own home, thanks to Lake County Contractors. We received 150% of our dwelling coverage because of Mark Mitchell. His expert knowledge of reading and understanding polices, combined with the document he prepared for our insurance company resulted in our receiving all money upfront with the exception of recoverable depreciation. Recoverable depreciation is released upon a final.  Mark Mitchell and Aaron Wooden are true professionals. During the rebuild process they addressed our concerns, dealt with the County, showed compassion and always made us feel we hired the perfect company for our rebuild.  Their office staff is outstanding.  LCC rebuilt our son's home and our daughter's home too. We have no regrets and wish them all the best as they continue on their mission to rebuild homes for fire survivors.”

“Lake County Contractors Inc provided everything from advocating with the insurance, navigating through various obstacles that seemed to be only against us, to providing the new up to date laws and regulations into our house plans so that the County would stamp APPROVED for the building permit. From start to finish the office staff and workers provided us with a happy attitude and their office has a calm and positive atmosphere. We would highly recommend Lake County Contractors Inc to anyone who is dealing with their insurance company and feeling defeated, there is hope when you go through a reliable company,”

“Lake County Contractors not only got us back in our home in 6 months after the Valley Fire but they took care of all the paperwork with the County so we didn't have to. They were very fast, caring and just simply AMAZING!! Thank you for our BEAUTIFUL home!!" 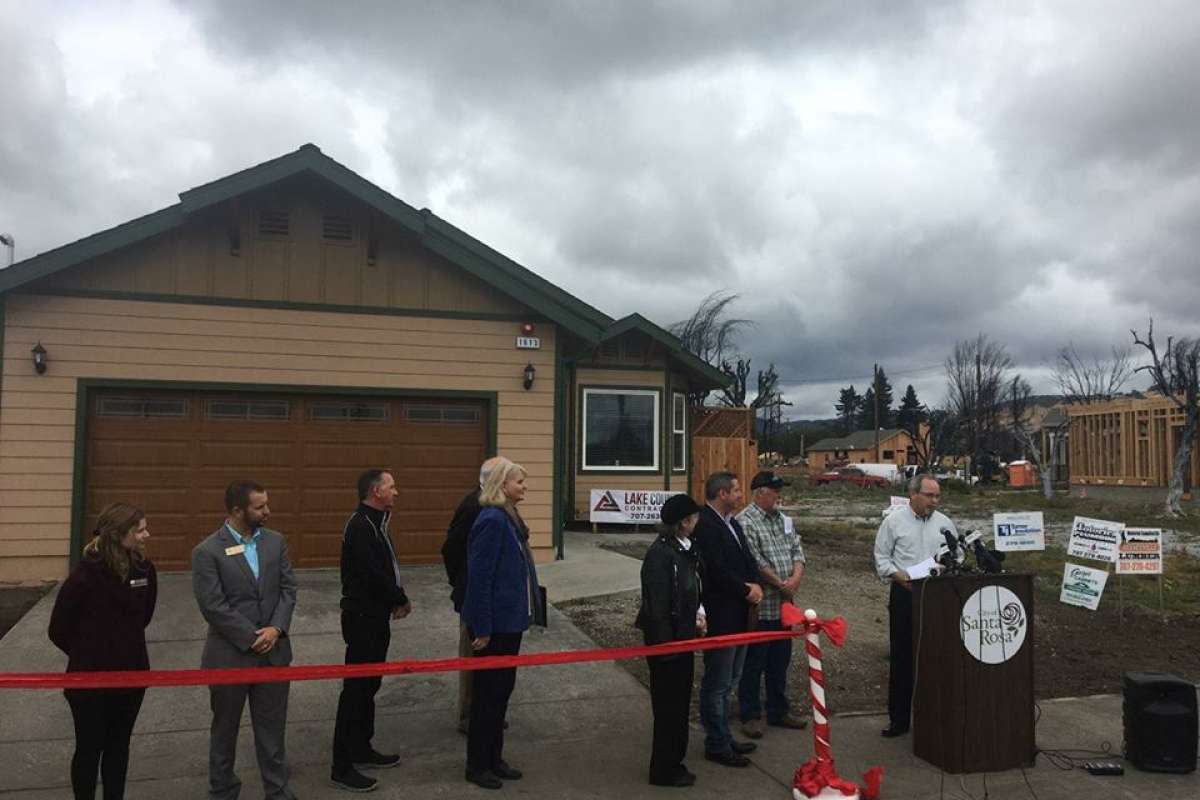 A sign of rejuvenation has sprung up in Coffey Park. It is brown and green and new, with gleaming windows and freshly polished doorknobs. It is the first home to be rebuilt after the North Bay fires devastated the Santa Rosa neighborhood last year.

The city of Santa Rosa celebrated the completed Kerry Lane house with a ribbon-cutting ceremony on Friday. Its owner, Dan Bradford, moved in that morning.

More than 2,000 homes and structures were destroyed across the North Bay when wildfires broke out in early October. Coffey Park was particularly hard hit, and aerial images of the destroyed neighborhood became a national symbol of the devastation wrought by the firestorm.

Sonoma County suffered by far the greatest destruction from the fires: 3,963 homes were destroyed and 7,766 suffered damage, which together accounted for $2.6 billion in property losses.

Rebuilding has been a slow, arduous process for those who lost their homes in the tragedy.

“Little did I know when I left here on October 9, it would take me eight months to get back in,” Bradford told ABC7. He lived in a small rental while awaiting the completion of his house and the securing of funds needed for construction, which began in December.
Bradford was luckier than some. The fires did not contaminate his home’s original foundation, whereupon his new house sits. Everything else is brand new.

State Assemblymember Marc Levine, who represents Marin and southern Sonoma counties and attended the Friday celebration, said Bradford’s house “is among many milestones we will celebrate as a community in the coming years.”

More than 160 homes are currently under construction in Santa Rosa.

Kathleen Pender, a San Francisco Chronicle columnist, contributed to this report.
Michelle Robertson is an SFGATE staff writer. Email her at mrobertson@sfchronicle.com or find her on Twitter at @mrobertsonsf.